Will the Pre schools receive the allocated funds by SEDIC? - 438 teacher's life at risk 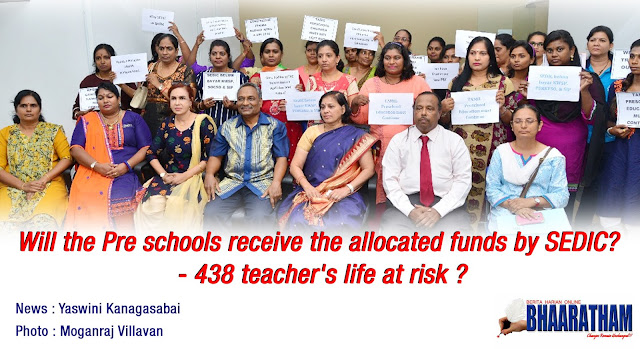 Pre schools which were operating through Socio-economic Development of Indian Community or best known as (SEDIC), are stumped as they stopped receiving the funds that granted for them due to uncertain reasons. In accordance to that,  438 teachers, assistant teachers and almost 7000 students future has become question mark. Dato Batumalai Ramasamy, President of Pertubuhan Prasekolah Malaysia claimed that they are going through tough time because the situation is getting worst day by day. This issue affects the students academic progress.

The 5 ngo's which has been operating since 2015, played a major role in 7000 underprivileged students life where the students has been offered an opportunity to get the education equally as other children. The preschools were receiving granted funds accordingly for the past two years. As per Instructions received from Prime Minister Depatment on 2018, the NGOs came out with a statement stating that they will operate the funds themselves and pay the salaries, EPF and SOCSO directly from January 2018 onwards.

Unfortunately, the allowance for the months of January and February  were not received accordingly by the teachers where they received it two months later from the scheduled date. They received their allowances for the month of January on March and February month's allowance on April respectively. They yet to receive their allowances for the months of April and May till to date. During the press meet held recently, they expressed their disappointment as this issue distracts the teaching and learning process.

The teachers faced multiple challenges in running their family without any source of income due to the delay in receiving their salaries. The teachers EPF and SOCSO are still pending since January 2018 which was promised to be released to the respective NGOs. Not only that, the student's insurance are also still pending which means the teachers are required to spend more time looking after the children's safety.

Among those who attended in the press meet which was organized recently are Dr R.Rupa Saminathan, Deputy President, secretary of Pertubuhan Prasekolah Malaysia, Surya, committee members and some of the pre school teachers.

With the form of new federal government which was formed after the attack of political Tsunami on 9th May, they strongly believe that the funds allocated by SEDIC will be released to the respective NGOs as soon as possible. The decision which will be made by new federal government towards this issue will decide the 430 teachers and 6 350 students future. Will they get a solution?

By myBhaaratham - May 30, 2018
Email ThisBlogThis!Share to TwitterShare to FacebookShare to Pinterest