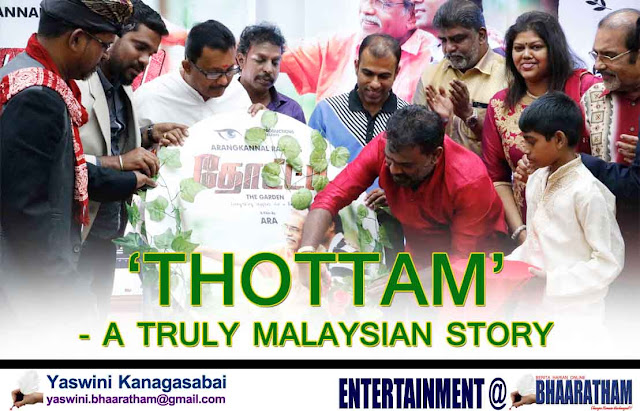 'Thottam' a movie fully based about village life, directed by Arangkannal Rajoo, will be hitting the big screens real soon. The entire team believes that this movie will evoke a nostalgic moment among audience as it will reminisce the good old memories of those who have experienced a village life before. The audio launch of this movie has been held at the Auditorium of Tan Sri  Soma recently. It was privileged for the entire team to inform that this movie has been selected for special screening at 8th Norway Film Festival.

Besides, the director also wishes to dedicate this amazing movie for the Indian community who sacrificed their life and faced a difficult time during the British colonial period 200 years back where thousands of Indians were brought in as indentured (contract) workers to work in various plantations across British Malaya. 'Thottham' team strongly believes that this movie will definitely recall back the memories about Malaysian Indian's lifestyle before gain independence.

Sree Sai Dev worked as the music director of this movie while the late legends Na.Muthukumar and Annamalai has been the lyricist for the wonderful songs in this movie. As giving respect and mourn the passing of this two great lyricists, there has been one minute of silence during the audio launch of this movie.


The audio launch which was organised by Revvind Production in a short period of time, successfully gathered numbers of Malaysian artists such as K.S. Maniam, ST Bala, THR Raaga Kavimaran, M.S.K. Selvamary, Elango Annamamalai, Dato Subash and many more.
By myBhaaratham - October 02, 2017
Email ThisBlogThis!Share to TwitterShare to FacebookShare to Pinterest