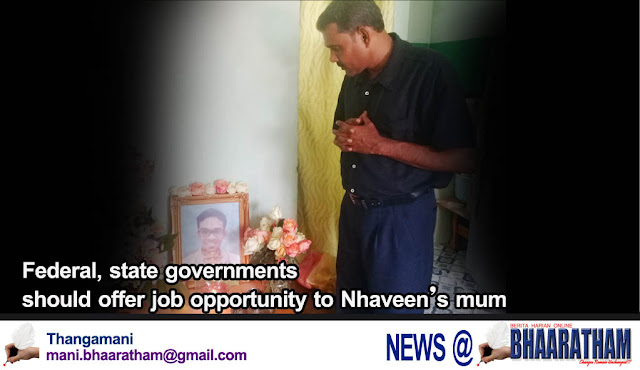 Georgetown, June 19-
While the family of brain-dead teenager, Nhaveen (18) who was brutally assaulted and died last Thursday at the Penang Hospital, has been receiving condolences throughout nation, the federal, state governments should come forward to help them face the challenges said Sungai Siput M.I.C secretary K.Manimaran.

Nhaveen was brutally murdered while he was eagerly waiting to start his higher studies at Kuala Lumpur. The death of Nhaveen is certainly unacceptable by the single mother who was relying on his moral support. The teenager was the hope of this family which lived a moderate life.

Nhaveen’s mother D.Shanti, has been hoping that he would shoulder the family in future, is now inconsolable. It is now vital for her to overcome the challenges.

After meeting Nhaveen’s mother and the family K.Manimaran suggested, under the humanitarian ground, the federal, state governments should offer a job opportunity to Nhaveen’s mother. It would be a relief to her who is struggling to accept the loss of her son.

Various parties including prime minister. Chief minister have been pouring their condolences to the deceased family. It would be more appropriate if they could offer helps relevant to the needs of the family.